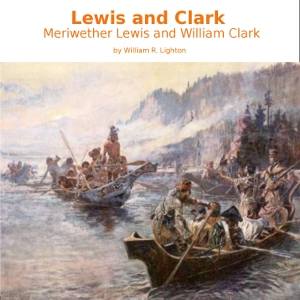 Meriwether Lewis and William Clark - In the years 1804, 1805, and 1806, two men commanded an expedition which explored the wilderness that stretched from the mouth of the Missouri River to where the Columbia enters the Pacific, and dedicated to civilization a new empire. Their names were Meriwether Lewis and William Clark. This book relates that adventure from its inception through its completion as well as the effect the expedition had upon the history of the United States. (Summary from the text and Roger Melin)

The book is relatively short. Lighton seems to skip over some aspects of the journey which were more heavily emphasized in Ken Burns' video work, but he also gives more insight than Burns into the sorry state of the Corp during their winter on the Pacific, and during the trip back across the continental divide. Lighton is selective in what he includes - many people and events are not mentioned at all. He has little general regard for the native people that the Corp encountered, but he does heap praise on several tribes for their generosity and kindness. Unfortunately, he does not see the parallel in "civilized" society to the variety of characters he paints in the native peoples, but this is not an unusual view of the Indians in Lighton's time. It's a sad comment on our fallen natures that we continue to engage in sweeping condemnations today - albeit with differing targets and motives.